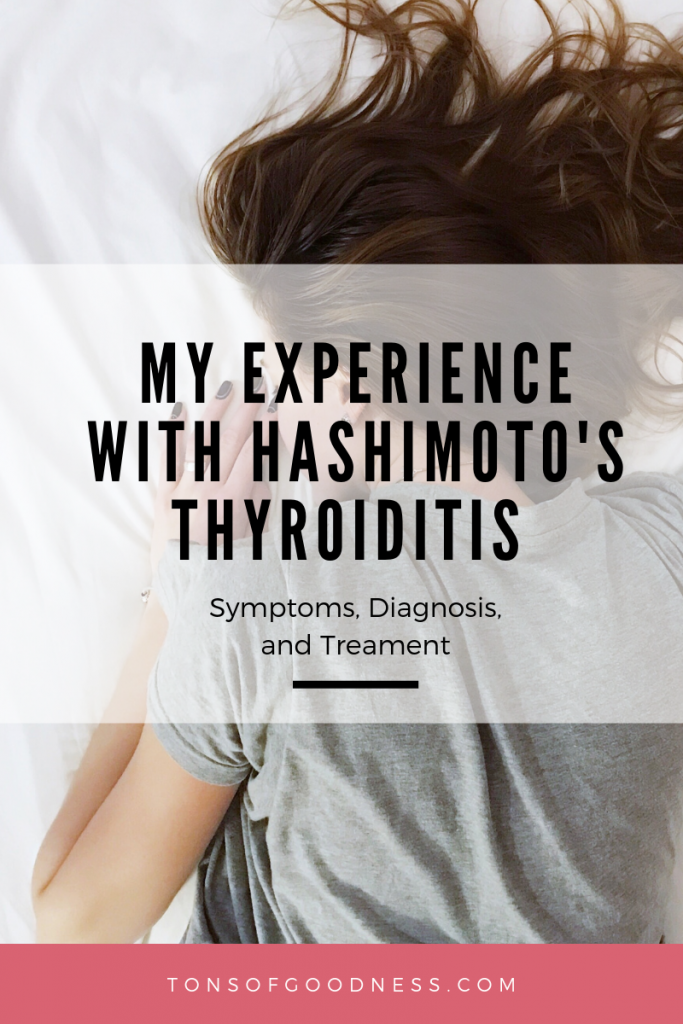 I have been on a bit of a hiatus due to work, family, and life in general. Thankfully, the school year is coming to an end. I am excited to finally wrap up my school psychology job and get back to writing. A topic that I have been wanting to write about is Hashimoto’s symptoms, diagnosis, and treatment.

I haven’t written about this in the past because it’s such an elusive condition. I say elusive because there are so many different viewpoints about the best treatment for this condition, from special diets to medication to exercise. It’s also mysterious because there is not just one root cause and the symptoms vary from person to person.

I feel, however, that even though I don’t have all of the answers I would love to share my story and what has helped me live with this condition. I think it’s also important to raise awareness so that others can identify if they have this condition, seek treatment sooner, and finally get their life back.

What is Hashimoto’s Thyroiditis?

Hypothyroidism occurs when the of thyroid hormone that is produced is not enough for the body’s needs. It is possible to not have any obvious Hashimoto’s symptoms at the early stages. Hashimoto’s disease typically worsens slowly over many years and without treatment can cause progressive damage to the thyroid gland.

The symptoms of Hashimoto’s can be debilitating. Some of the early symptoms I experienced include extreme fatigue, brain fog, and muscle aches. I began to have symptoms as early as middle school. I couldn’t seem to ever get enough sleep to feel functional, so I got through life by taking a lot of naps. In college and grad school, I used large amounts of caffeine to keep me alert. Still, I felt like I was in a fog and missing out. I was in such a fog for so much of my life that my memory of those years is also cloudy.

Later in I experienced depression, anxiety, fertility problems, and unexplained weight gain. These symptoms persisted no matter what I did. Hashimoto’s symptoms are frustrating because one day you may feel fine and the next it hits you like a ton of bricks. I have now, for the most part figured out what triggers my symptoms, but at times the triggers are difficult to spot and I just have to wait for the symptoms to subside.

There is no one specific sign or symptom that is exclusive to Hashimoto’s and the symptoms vary from person to person.

The following are common Hashimoto’s symptoms:

I think that it is vital to know that thyroid conditions can result in mental health conditions. Having a thyroid condition can make you feel more emotional than you felt before. You may find that your mood changes, sometimes rapidly and unpredictably.

It’s common for individuals with Hashimoto’s and hypothyroidism to experience anxiety (a feeling of nervousness, with butterflies, heart racing and trembling), depression, mood swings, and sleeping difficulties.

As I mentioned previously, brain fog is a huge cognitive symptom of Hashimoto’s. Brain fog can result in difficulties with concentration, short-term memory lapses, and lack of interest and mental alertness.

How to Clear Brain Fog and Reclaim Your Day

It is not entirely clear why the immune system, which is supposed to defend the body, sometimes turns against the body’s healthy tissues. But what is understood is that there are some factors that may make you more susceptible to this disease. These factors may include:

There are several inherited genes associated with Hashimoto’s disease, but the two most common are HLA-DR3 and HLA-DR5. Having one of these genes does not mean a person will definitely develop Hashimoto’s, it just means that their risk is increased.

Lifestyle factors can contribute to the development of Hashimoto’s disease, specifically smoking and stress. Other stressors associated with most autoimmune diseases include lack of sleep, eating a low-calorie diet, nutritional deficiencies, and lack of activity. When the body isn’t getting the nutrients and other essentials it needs for optimal function, it overcompensates from other body systems, especially the immune system, which overacts in response.

Pregnancy impacts thyroid hormones in a number of ways. It is possible that some women will develop antibodies to their own thyroid during or after pregnancy. This is called postpartum autoimmune thyroid syndrome or postpartum thyroiditis and it’s said to be the most common thyroid disease in the postpartum period with an incidence between five to nine percent.

How Hashimoto’s Disease Is Diagnosed

I rarely hear of anyone figuring out from their first visit to the doctor that they have a diagnosis of Hashimoto’s. I sought help from multiple doctors and multiple visits to each before figuring out what was going on with me. What happened at the previous visits? My thyroid levels were checked and were found to be “normal”, my iron levels were checked and were found to be “normal”. When I spoke about weight gain concerns there was no response other than, “well, you are in a range normal for your height”. So, all was normal according to their data, but I was definitely NOT feeling normal. One of the last doctor’s I saw humored me and started me on a low dose of Synthroid for subclinical hypothyroidism (the go-to thyroid hormone replacement medication). This did not do a thing for me.

Finally, I sought out help from Allison Dunaway, who is a Registered and Licensed Dietitian & Certified LEAP Therapist. I contacted her to see if maybe there were dietary changes that I could make to help me feel better. My daughter was a year old at the time and I felt like I was missing out on her life. I was able to function enough to take good care of her. However, I was in a cloud and so tired that I was frightened that my memories and experiences with her would all turn in to a blur like everything else.

I am so thankful for Allison and always will be. During my first meeting with , she listened to my concerns and suspected that I may have Hashimoto’s.

She gave me a list of blood tests to request from my doctor. These included a TSH test, free T3, free T4, thyroid (TPOAb), and thyroglobulin antibodies (TgAb). After reviewing these results she determined that I did have a diagnosis of Hashimoto’s. One of the indicators was that my thyroid result was 148 (the normal range is 0-34), so this was extremely high as compared to the normal range.

Finally discovering what was going on with me was a relief to say the least. Also, finding someone knowledgeable about my condition was life-changing.

The first thing that I did was change my diet. It is important to let your system rest and your gut heal if you want to normalize your immune system. So, I participated in the Mediator Release Test (MRT) which identifies food sensitivities.  The information from this test is used to design a personalized, multi-phased elimination diet which a LEAP (Lifestyle Eating and Performance) diet. This helps to identify and remove reactive foods that are causing and contributing to symptoms. This plan also helps you to add safe, non-reactive foods that work for your body to help it heal. After completing this program I began to feel relief from my symptoms. The clearing of brain fog and fatigue were the most apparent.

I want to point out that there are tons of elimination diets out there, but this is different in that it is custom to you. As you can see in the list below I was reactive to things I would have never suspected like cucumber, parsley, and strawberry. I would not have know this without completing this test.

Just to clarify, food sensitivities are different than food allergies. Food allergies are generated by the IgE branch of the immune system. Reactions will usually show up within minutes of ingesting the reactive food. Shellfish and nuts are the most common foods that result in an IgE food allergy.

Food sensitivities, on the other hand, are governed by different parts of the immune system: the IgA, IgM IgG branches. These reactions may take as long as a few hours or even a few days to manifest.

Hashimoto’s and Gluten and Dairy

I also eliminated gluten and dairy from my diet as part of my treatment. These are two of the most common foods to avoid because they increase intestinal permeability, disrupt the balance of healthy gut bacteria, and contribute to Hashimoto’s thyroiditis. Many people find immediate alleviation of symptoms simply by eliminating one or both of these foods. For others, relief may be only partial or take longer to become apparent.

In addition to changing my diet, I also sought out a physician that specializes in functional medicine. She analyzed my blood test results to determine the optimal treatment for me. Like I said earlier, Synthroid did not work for me and it doesn’t for many people with Hashimoto’s. Hormone therapy options other than Synthroid include Cytomel (liothyronine), a combination of T4 and T3, or desiccated .

With the combination of thyroid hormone, dietary changes, and lifestyle changes I am feeling better and am more able to function throughout the day. Not to say that I don’t have to be careful and be super aware of things that trigger my symptoms. Sometimes they are difficult to avoid and I’ll go weeks before I can feel normal again.

Although Hashimoto’s is incurable, it can be put into remission through dietary changes, medication, and lifestyle changes. Remission might not reverse tissue damage that has already occurred, but it can bring back the quality of life that was once lost to Hashimoto’s Disease.

There is so much more I would love to share with you in future posts about things that have helped me to cope with Hashimoto’s symptoms. I am always learning too, so please feel free to share your tips and resources in the comments. I would love to hear from you.

The Step-by-Step Guide to Exercise with Hashimoto’s Thyroiditis

How to Clear Brain Fog and Reclaim Your Day

11 thoughts on “My Experience with Hashimoto’s Symptoms, Diagnosis, and Treatment”