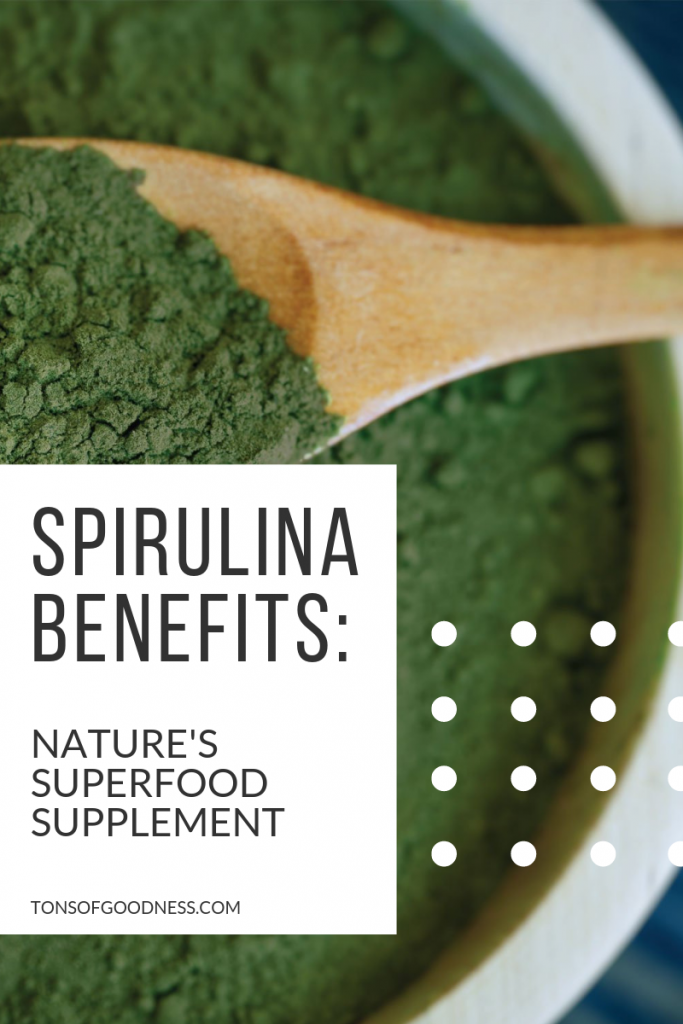 I have been adding spirulina powder to my morning protein shake for about a year now. After I heard about how it can boost energy and protect overall health I had to try it and now I’m hooked. Spirulina truly is nature’s superfood supplement. In this post, I’d love to share information about spirulina benefits, how to choose a spirulina supplement, and how to easily add it to your daily routine. Trust me, you will love it!

Spirulina is a unique blue-green that grows by the hundreds in a single drop of water. It grows naturally in oceans and salty lakes in subtropical climates and derives its energy from the sun. It has been consumed for centuries due to its high nutritional value and health benefits.

Spirulina is one of the most nutritious, concentrated whole foods known to humankind. It’s even been used by NASA as a nutrient-rich source of sustenance for astronauts on space flights. It is a great idea to take a spirulina supplement daily for the following reasons:

Spirulina contains potent nutrients known as polysaccharides which are a powerful immune system booster. Studies have shown that supplementation of spirulina may alleviate anemia and immunological dysfunction in individuals over the age of 50. Another study found that spirulina may be effective and efficient in delaying HIV disease progression by improvement in immune response studies confirm and benefits as a powerful immune booster, showing it can combat Candida overgrowth and encourage a healthy gut microbiome. Pretty amazing.

A study completed at Ohio State University found that Spirulina may increase your ability to resist mental and physical fatigue. This study showed that after 1 week, a 3 g/day dose of spirulina produced a small, but statistically significant increase in exercise output and improved mental performance. Similarly, a subjective survey for a sense of physical and mental fatigue showed improvement within 4 hours of the first supplementation as well as 8 weeks later.

This spirulina benefit is the reason why I tried it a year ago and have used it every day since. I use it in the morning and sometimes in the afternoon if I need a natural energy boost.

Spirulina supports cardiovascular health by reducing total cholesterol and lower LDL (bad) cholesterol while increasing HDL (good) cholesterol. There is also evidence that it could help control blood pressure. A small-scale 2016 study found that eating spirulina regularly for 3 months reduced people’s blood pressure when they were overweight and had hypertension.

Spirulina has an amazing nutritional profile. It is a complete protein, containing essential and non-essential amino acids. It is rich in iron, vitamins A, E, and B, potassium, enzymes, minerals, phytonutrients, and beneficial fatty acids like DHA and GLA that contribute to the body operating in optimal condition.

Hawaiian Spirulina contains higher levels of some key antioxidants, enzymes, vitamins, and minerals than 5 servings of fruits and vegetables. It also has the most beta-carotene of any food, and it has a full spectrum of ten mixed carotenoids.

5. Reduces the Risk of Cancer

More than 115 peer-reviewed articles have been published in the scientific literature evaluating spirulina’s ability to affect cancer cells. For example, in an article published by researchers at Charles University, it is reported that spirulina is rich in compounds closely related to bilirubin molecule, a potent antioxidant and anti-proliferative agent used to inhibit tumor cell growth.

Similarly, a study conducted by researchers in Poland revealed that “the results obtained provide evidence of the anti-cancer activity of the commercial Spirulina product against lung cancer cells and strongly support the knowledge of the chemopreventive properties of Spirulina.”

Without question, these studies confirm that consuming spirulina appears to be natural cancer treatment.

A 2018 paper highlights the potential role that spirulina could play in treating mood disorders, such as anxiety and depression. The theory is that spirulina is a source of tryptophan, which is an amino acid that supports serotonin production. Serotonin plays an important role in mental health.

In a 2012 study, a spirulina-enhanced diet given to rats provided neuroprotection in a model of Parkinson’s disease. In addition, a study completed in 2017 proved that spirulina supplementation prevents the accumulation of a protein that causes dementia and memory loss. It increases the levels of antioxidant enzymes to protect neurons in various parts of the brain that deal with memory. While these studies are preliminary and involving animals, they hold promise for humans afflicted with Parkinson’s disease, other neurodegenerative diseases and those with memory problems.

Another spirulina benefit is that it assists the body in flushing out toxins, including heavy metals. The reason why it works so well is that it contains proteins and peptides that are particularly good at binding to the toxins and excreting them out of the body. Therefore, they will not be absorbed into your bloodstream and work their way into your system. Spirulina is so effective that it has been found to be a useful treatment for chronic arsenic poisoning after exposure to arsenic from groundwater. Spirulina is also known to be alkalizing to the body, which boosts liver function, a necessary element while detoxing.

How to Choose a Spirulina Supplement

Spirulina is available in powder, capsule, or tablet form. In general, powders are more reliable for absorption than tablets, as in some cases the tablets may not fully disintegrate, leading to fewer absorbed nutrients. I also prefer powder to avoid fillers and/or binding agents that may not be easily digested. This may make it harder for your system to break down and full absorb spirulina’s nutritional content.

Hawaiian Spirulina is the only spirulina cultivated in a Biosecure Zone, certified free of pesticides, herbicides and industrial pollutants in Kona, Hawaii. Each pond is fed with 100% potable drinking water from Hawaiian aquifers and blended with pure deep ocean water to bring in beneficial trace minerals.

Nutrex Hawaii utilizes proprietary Ocean Chill Drying™ technology to dry the spirulina once it is harvested. This process instantly flash-dries the algae in as little as three to seven seconds, in order to eliminate the risk of oxidation of the algae’s carotenes and fatty acids that often occurs in standard drying procedures. I usually recommend more than one option, but I am so happy with this one that I have never tried another brand.

How to Easily Add
Spirulina to Your Daily Routine

Spirulina is potent and it may take a bit to get used to the flavor. A great way to start using spirulina is to start off slow and just add 1/2 a teaspoon to your beverage and then work your way up to the full dose. There are several options for how to use spirulina power:

Hawaiian Spirulina is also the featured ingredient in my Healthy Shamrock Protein Shake Recipe. This is a creamy, minty shake that is dairy-free, high in protein and is a pretty green color.

Of course, spirulina benefits kids as well. Who doesn’t want their child to have a stronger immune system? My daughter usually likes hers mixed into a chocolate protein drink or in spirulina lemonade (stir together sweetener, 3 tablespoons lemon juice, 1 cup of cold water, 1/4 tsp spirulina). We call it mermaid lemonade since spirulina comes from the water and my daughter loves mermaids.

When adding to your child’s food or beverage, make sure to start with a small amount so that they can adapt to the flavor. It could also help to tell your child that astronauts at NASA use it on their space missions!

Storage: The most important thing you can do to preserve spirulina once it has been opened is to refrigerate it. If kept cold (or even frozen) there should be a negligible loss of nutrients.

* Links marked with a * mean that I will receive a small commission if a specific action is made via the linked provider. There will be no additional costs for you.